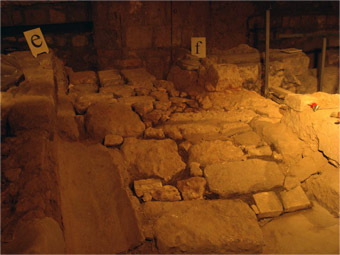 The paved path with a water drain that runs over the east-west retaining wall was built in the 4th century AD or later.

The paved path that the visitor can use to enter the archaeological park on their tour slopes down from north to south, indicating the height ratios of the period: the Church of the Holy Sepulchre and the area around it were higher up than the Muristan. The drainage channel illustrates this. The rectangular building adjacent to the paved path to the east probably belonged to a simple building on the southern edge of the forum.